I can hardly believe my eyes as I flip each calendar page forward and realize it is now a matter of weeks till we go on our Service Learning trip to Cambodia. Soon it will be a matter of days. Many things come up for me as I think about this quickly approaching date. My mind is often filled with thoughts such as: “What, oh what do I pack?”, “Still need to get travel insurance”, and “I’m going to miss my fiancé and my dog so much!” Not to mention my fear of the unknown in a drastically different culture and worries over whether or not I will represent my profession, my school, and my country in the best possible way.

Friends who have been to Cambodia reassure me: “the people are so nice! They are friendly and helpful, and they smile a lot!” This is probably because it is a collectivistic culture. Cambodians may try to please us in order to save face. It is not appropriate to show negative emotion in public either. In many Asian cultures there is a tendency to smile even when one is unhappy or upset. Knowing this, and being a friendly, smiley person myself, I feel relieved.  This will be much different from Europe, where I was the weird one for smiling.

Then I think, really? This does not mesh with another version I have learned of Cambodia. We are going over there to work with women and children who are victims of abuse and sex trafficking. Mothers have sold their own virgin daughters to the highest bidder. Domestic abuse runs rampant. Poverty is the norm and many children must make money for their families by digging in landfills or selling their bodies. Victims of land mines beg in the street. How can this be amongst a people of smiling and kind hosts? Obviously, not everyone is the same, and there is a big difference between the high and low socioeconomic statuses. But I would also like to look at the roles that survival, trauma, and resilience all play.

I recently read two books about survivors of the Khmer Rouge genocide. I highly recommend them both: “First They Killed My Father” by Loung Ung and “Never Fall Down” by Patricia McCormick. Their accounts paint the picture of the horrible atrocities that Cambodians suffered at the hands of the Khmer Rouge regime from 1975-1979. Loung Ung and Arn Chorn Pond share how they witnessed brutal violence and torture of Cambodian men, women, and children, the deaths of family members, starvation and disease suffered by everyone in sight, including themselves. What they survived is enough to drive anyone mad.

Loung Ung was five years old when the Khmer Rouge forced her out of her home. She quickly grew to hate them after witnessing their cruelty. At the age of eight she was forced to train as a child soldier and she writes “My skin vibrates with hate and rage…I hate Pol Pot for murdering Pa, Ma, Keav, and Geak [sisters]. I stab my wooden stake high into the dummy’s chest, feeling it puncture the body and hit the tree. Hard and fast, I stab it, each time envisioning…Pol Pot.” (Ung, 2000, p. 164).

Arn Chorn Pond was eleven when he was separated from his family and forced to work for the Khmer Rouge. In order to survive he had to follow their every order. He was made to watch a Khmer Rouge soldier kill a group of men by bashing in their heads with an axe. Then Arn had to roll the bodies into a ditch- even if they were still alive. The soldier checks for his reaction and Arn recounts “I make my eye blank. You show you care, you die. You show fear, you die. You show nothing, maybe you live.” (McCormick, 2012, p.53). 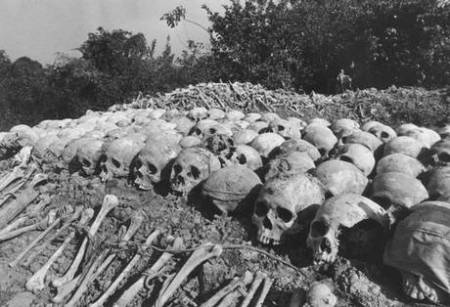 Close to two million people out of a population of seven million died during the Khmer Rouge regime led by Pol Pot (Spooner, 2012). William Shawcross describes the environment “where toil was unending, where respite and rewards were non-existent, where families were abolished and where murder was used as a tool of social discipline. The manner of execution was often brutal.” (In Spooner, 2012, p.93). The Khmer Rouge used terror to keep everyone in line.

These are a few examples to give you an idea of the type of trauma the Cambodian people lived through. The adults of Cambodia today were children who lived in a heightened fight, flight or freeze response for four years while the Khmer Rouge were in power.   Most were on the verge of starving to death the entire time as well. Many lost parents, aunts, uncles and other adults who could care for them and guide them after it was all over. This may lend to some understanding of why sex trafficking, abuse, and poverty are so prevalent in Cambodia right now. We know from trauma research that “short- and long-term outcomes of these childhood [traumatic] exposures include a multitude of health and social problems including… alcoholism, drug abuse, fetal death, and interpersonal violence (CDC, 2011, in Steele & Malchiodi, 2012, p. 3). See the blog post by Chelsey Langlinais from March about individual and intergenerational trauma and how we use art therapy to work with it.

It’s actually quite amazing that every Cambodian is not now violent and damaged because of the trauma they went through. Far from it. Human beings are extremely resilient and I believe Cambodians are an example that demonstrates this and I look forward to witnessing it first hand. When I wonder about how people (any group, even in the U.S., and more recently groups involved in sex trafficking) can live in violence and betray the innocence of their own family members, I think it’s helpful to wonder about the kind of trauma they may have gone through. It helps me to try to make sense out of a seemingly senseless thing. I am privileged and lucky enough to not have to know what it is like to put survival (of body and spirit) before everything else.

Loung Ung and Arn Chorn Pond are shining examples of resilience. Ung lives in the U.S. and is an author and spokesperson for the Campaign for a Landmine Free World. Pond lives in Cambodia and has founded Cambodian Living Arts, which strives to preserve traditional arts of Cambodia. We may even get to meet him while we are there! They both have witnessed horrors that I cannot even comprehend, and they are devoting their lives to repair the damage that was done by the Khmer Rouge.

Ung, L. (2000). First they killed my father: A daughter of Cambodia remembers. New